How to Score on Super Bowl Catering 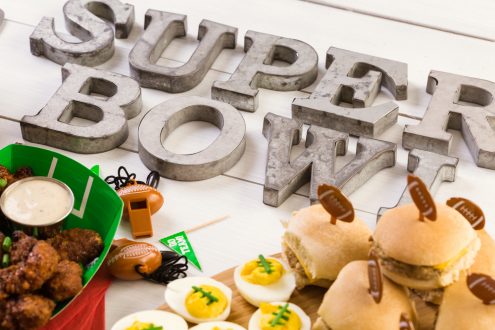 As the Bengals and the Rams prepare to face off on February 13 for Super Bowl LVI, it’s time for you to start preparing too. The Super Bowl is known for hilarious commercials, killer parties, delicious snack trays… oh, and football. If you plan on throwing a (Covid-friendly!) Super Bowl party this year, you might want to think about catering for the big day. We’ve compiled a list of some of our favorite Super Bowl menu items (and Super Bowl deals) in the NYC metro area – check it out for some inspiration! Is anyone really surprised that chicken wings take the lead for the #1 craved meal on Super Bowl Sunday? The classic American snack began its reign with the rise of sports bars decades ago, and it’s only been uphill from there: Americans are projected to eat 1.42 billion chicken wings while watching the 2022 Super Bowl.

Don’t miss out on the fun – put wings on the menu when you order your Super Bowl catering! Try All Stars Sports Bar & Grill for traditional, boneless, and cauliflower wings in the Hells Kitchen area. Looking for a kosher Super Bowl catering option? Check out Buffalo2Go in Midtown East. A clear MVP in the party food world, pizza is so popular because of its ability to serve large quantities of people and satisfy a range of tastes. Plus, modern pizza can accommodate every dietary restriction, making it the perfect foolproof party snack.

For Super Bowl pizza delivery, try Emmy Squared (locations in East Village, Upper East Side, and Brooklyn) for regular and gluten-free pies. Catering to a plant-based crowd? Try Zazzy’s (locations in Lower East Side, West Village, and Upper East Side) for vegan choices that could fool any carnivore. Looking for something on the classy side? Stone Bridge Pizza & Salad offers farm-to-table artisanal delights at their Midtown location. Subs are another great option for any Super Bowl menu. A platter full of sandwiches is another versatile option to accommodate any quantity of people. Easy to eat, easy to transport, easy to please a crowd. What could be better?!

Whatever you end up munching on for your Super Bowl watch party, choosing CaterPlace is always a touchdown. Place your order through CaterPlace and earn up to 15% back in money to spend at Amazon. Plus, place any first-time order of $150 or more and we’ll throw in an additional $100 Amazon gift card!

"At CaterPlace, we recognize that food choices are everywhere and practically limitless. With that in mind, our core values have always had the customer as the top priority. Not only do we want to provide you with on- time delicious food, but also reward your continued loyalty through our CaterCash program. More About CaterPlace

Why You Should Try Catering Your Holiday Dinner This Year